Last Saturday, at Derby Cathedral, we were treated to an evening of the most outstanding musical performances. In the first half, we heard our intermediate choir and a number of a senior musicians performed solos. Congratulations to Hannah, Fiona, Betty, Grace and Rosie, our fabulous soloists. My thanks go to Mrs Lesley and Mr Marshall for their hard work ensuring the evening was a true success. In addition, I would like to thank our peripatetic music staff and a number of senior school staff who have worked tirelessly in the background. Thank you to all those who attended, ensuring we had a very full audience for this stunning event.

Thank you to all those who have contacted us with very supportive messages following our communications regarding measures taken in the light of the Coronavirus. We understand these are uncertain times and I appreciate your full support in ensuring that the welfare of our school community remains our top priority.

We enjoyed a wonderful evening of music on Saturday 7th March at Derby Cathedral for the 16th Derby High School and Derby Grammar School Joint Choral Society Concert.  There were outstanding solo performances by Hannah, Fiona, Betty, Grace and Rosie.  It was a pleasure to see Derby High students performing at such a high standard and expressing themselves with such maturity and musicianship.  Congratulations to all of them. The intermediate and chapel choir sounded beautiful as they performed songs by Vivaldi and Rutter whilst being accompanied by the stunning orchestra.  The choral society, vocal soloists and orchestra were conducted by Paul Marshall in a stirring performance of Haydn’s Nelson Mass.  Thanks go to all involved for bringing together a memorable evening of music and a real highlight of the year. Mrs Lesley. 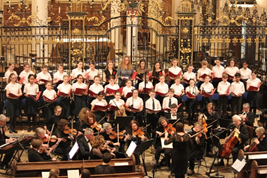 U6 Physics trip to Cambridge

Last Friday, the U6 physicists visited Cambridge to look around the museum at the Cavendish Physics Department and the electron microscopes in the Department of Material Sciences. The purpose of the trip was to see historical and working examples of equipment that has played a crucial role in some of the ground breaking experiments in physics in the last 150 years, which our students are currently studying in their A-level option. We were very lucky to have a guided tour of the museum by Jacob Butler, who explained the history and workings of equipment on display; this included a replica of Thomson’s apparatus that discovered the electron, the original, slightly battered, device designed by Chadwick that identified the neutron and one of the DNA double helix models built before the availability of computers by Watson and Crick, to name but a few. In the space of 20m, we were shown no fewer than five original pieces of equipment that won Nobel Prizes for physics, and which were developed in the department! Afterwards, we made the short walk to the materials sciences department where Dr John Walmsley kindly showed us the workings of both scanning and transmission electron microscopes using a range of samples and his considerable expertise. To finish our trip, we took advantage of the sunny weather and walked into the centre of the city to see some of the older, historical colleges and departments, and took the opportunity to have some much needed tea and cakes before the journey back to Derby. We would like to thank Jacob Butler and John Walmsley for giving up their time to make the trip interesting and relevant for our U6 students.

Saturday 7th March was the first Park Run for Derby High. We took part to gain points for our house and to increase participation and be physically active during the month of March. Staff and students from both primary and seniors, and their families and dogs, came down to Markeaton Park for the 5km route, which consisted of 2 laps of the route with people running, jogging and walking! Miss Allum was there encouraging everyone as they went round the route, and it was really fantastic to see everyone having fun and enjoying being active on the sunny Saturday morning whilst completing their ParkRun! Shout outs to Mrs Ince, Mrs Steer, Mrs Driver, Mrs Martin-Smith and Mrs Roe for their efforts! 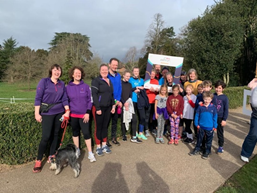 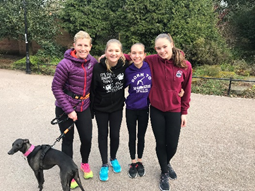 Emma did a fantastic job teaching her chorography to the rest of the group this week. She started by giving the group some key information about Cheer and taught them a number of actions to create a dynamic routine. It was that good that Mrs Hancock decided to join in – see if you can spot her in the photo! Well done Emma, you make a fantastic leader! 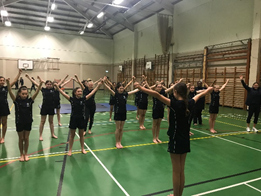 On the wet and windy afternoon of Tuesday 10th March, the U12s took part in their City Netball Tournament at Littleover School. The team had four pool matches to play, before either progressing into the cup or the plate finals.

The team played really well together, despite the conditions, and managed to secure four wins from four games. They beat West Park 3-0, followed by a 5-1 win against City of Derby Academy, and a 5-0 win over St Benedicts. The final pool game was a 4-0 win against Leesbrook, which meant that they went through to the Cup semi-final as top of their group, which was a fantastic achievement.

The semi-final saw a tough and well fought game against Littleover. The game was very end to end and there were plenty of goals. Sadly, Littleover managed to squeeze a 5-3 win and progressed to the final. We then met West Park once more in the 3rd and 4th playoff game, and it was exceedingly tight! The team played well, moving the ball up the court nicely and thwarting any opposition opportunities. The game ended in a 1-1 draw and both schools were pleased that they finished in joint 3rd place out of ten teams. Not bad for their first City Tournament!

The team worked so well together, and really took on board all of the feedback they were given between games to make even more progress. Ella and Isabelle worked tirelessly to intercept and defend in the circle, whilst Aimee, Zainab and Connie made great interceptions and passes in the centre court, and some truly fantastic goals from captain Rosie and Sophia! Well done everyone! 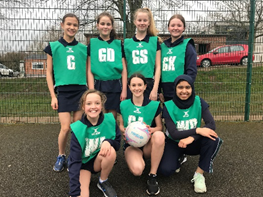 This week four of our talented Derby High students travelled to The Priory Academy in Lincoln, to take part in a regional Acrobatics competition. Millie and Megan were the first to perform their routine in the U14 age group which saw around 18 pairs competing against one another. The pair have been working hard in gymnastics club to perfect their partner balances which they are required to hold for 3 seconds. Their hard work paid off and each balance was held with control, strength and for at least 3 seconds, with compliments from spectators about the choreography of the routine. Priya and Sophia performed their paired routine second in the U14 group. Their performance demonstrated good execution of the skills and they kept good timing throughout.

The competition format meant that only the top two scoring teams were called to the podium and only the 1st position pair from each age group would then progress to the National final. Sadly, we did not make a podium position. However, it was clear from the girls' performances that they would have been placed in the top half of competitors. It was a great experience for all and we take back many tips, so we can come back even stronger next year. 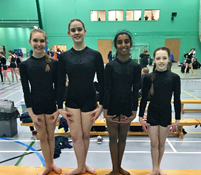 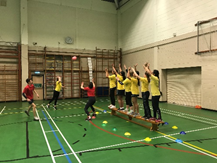 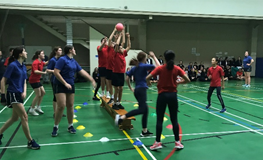 Walk All Over Cancer Fundraising

Our intrepid Technicians are almost halfway through their Walk All Over Cancer Lent fundraising challenge, and so far have clocked up 424,988 steps over the past 13 days, with 119,891 steps paced out by the end of break time during the school week! This equates to approximately 183 miles.

With 18 days to go they are hoping to raise as much as possible for this worthy cause. If you would like to sponsor them please follow the links to their Just Giving pages

Here’s a link to a blog about how to handle sexting incidents as a parent:

At the end of a busy and ultimately very unusual term, I would like to take this opportunity to thank our wonderful staff for their dedication, enthusiasm and good humour which ensures that Derby High is a happy and secure community for our children to develop their talents and skills.

Our competition is about getting active using one or more of the DownDog exercise Apps. There are 3 levels of awards for this competition, click here for more information.

It’s been another glorious day of sunshine. We’ve received lots of good news stories and positive comments over the last 24 hours from students and parents. Here are a few comments below: “Our Children have been enjoying and trying a lot of new things at home” “Dear Teachers - Thank you so much, my daughter really enjoys doing her school work. She goes to bed on time and wakes up on time – shower, PE, school work etc ! Sticking to her school routine and loves it” “Thank you Chaplain Jo. Wonderful words of wisdom”

The theme for this year’s House Art competition was ‘Environment’. It was open to pupils of all age groups in the Senior school and we even had a few staff entries this year too. Over the past few weeks pupils and staff have been busy viewing the amazing work in the Art gallery and voting for their favourites. Here is an online gallery of all the entries and the details of the winners! Well done to everyone who took part!

In my assemblies, I often talk to Primary about the weather and how it can affect our mood. We have been very lucky this week (and the forecast suggests this will continue) as the sun has shone brightly. I do hope that many of you have been able to benefit from this boost. Here’s a wonderful picture from one of our Year 5 pupils, who was able to draw this outside.