Bullying affects millions of lives, but it does not have to. If we challenge it, we can change it by reaching out; the theme for this year’s anti-bullying week. That is why we proudly take part in the anti-bullying week each year.

In our student led assembly on Monday, our anti-bullying ambassador Zara (Lower Sixth) and Year 9 students discussed the importance of speaking out if we notice unkindness, being kind to everyone through our words and actions, including others, treating others with respect and celebrating differences.

Lydia in Year 9 read a beautiful and insightful poem that she had written:

I thought they were my friends

I thought they liked me

I thought I could be happy

I thought they were only joking

I thought it was just banter

I thought that I should find it funny too

I thought they'd comfort me

I thought they wouldn't ignore me

I thought I was okay

I thought their words hadn't affected me

I thought I could do this

I think it's starting to be okay

I think I I've made new friends

I think this is good

I think ... because it's the truth

I think I'm finally rid of my 'friends'

I think that I am a much better person now

I think that I can finally be me

I think ... because it's the truth

This week, the whole school joined together to make a positive impact through this year’s Anti-bullying Week, with myself and Year 9s leading the way. This is because this year, I have been given a brand-new role.

I would like to introduce myself to all of you as Derby High School’s very first Anti-bullying Ambassador. My job is to support our school community as well as being a listening student ear, as it’s vital for students to know that they have a point of contact in the Sixth Form.

This week, we made and presented an assembly, emphasising that Derby High does not tolerate any form of bullying. Following this, every day, the Year 9s have put positive messages on students’ lockers and in form registers to raise student moral. Furthermore, we have sold merchandise from the Anti-bullying Alliance to raise money for a charity, which will be decided at a later date. 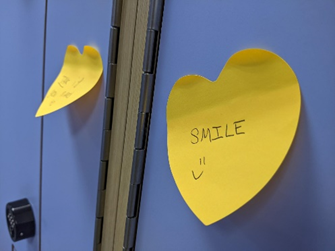 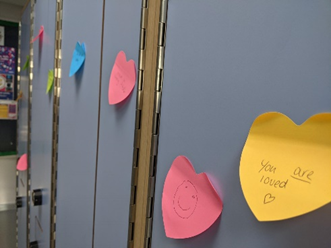 Overall, through my role, I hope to ensure that everyone in our school community will feel safe, valued, and supported. 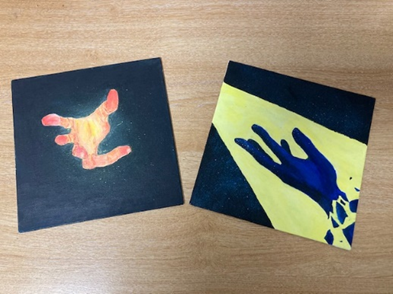 Linda, Year 9, has produced these two wonderful pieces of art (above) for Anti-bullying Week under the theme of Reach Out.

Yesterday morning our Senior Hall was filled with laughter and the audience captivated by our House Drama competition. The chosen play this year was Arabian Nights by Dominic Cooke. The 2009 play text was used for the competition and divided into four sections for each house to perform.

The four House Captains did a fantastic job, each producing their section to a very high standard.  Each team showed a real dedication in rehearsals and throughout their performance. The winning House of the competition will be announced in assembly next week. 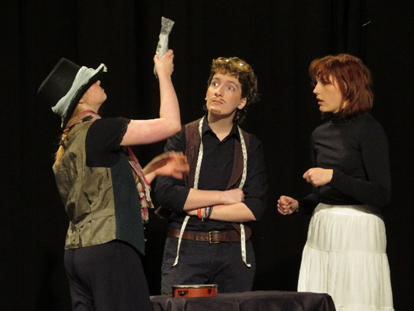 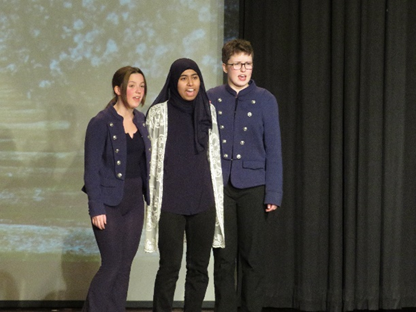 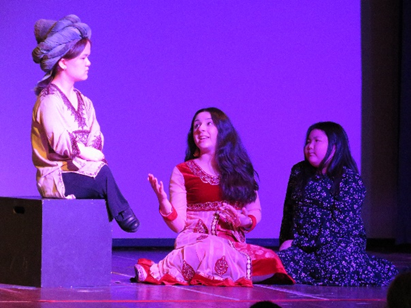 On Tuesday the Social Science students were finally able to go to London after their previously cancelled trip. Despite setting off at a very early hour, spirits were high and after our journey we arrived at the Palace of Westminster for our tour in gorgeous weather. Students had a fantastic guide, saw the different Houses of Parliament and spotted many recognisable politicians along the way. After a short walk along the South Bank, some bought lunch from Amazon Fresh, the walk-in, walk-out cashier-free grocery store - an interesting experience. Another short walk to the Bank of England museum followed, with students able to see the history of this important institution as well as lift up an actual 12kg bar of gold.

Students were then able to spend time in Leicester Square and Covent Garden enjoying the festive atmosphere before heading home.

As ever, Derby High students were a credit to the school and made the entire trip enjoyable for all. 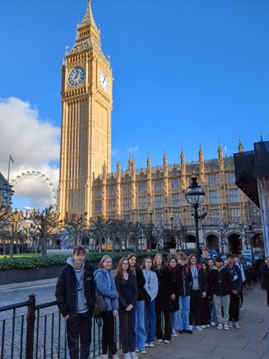 Last week, 14 of our Year 11 and 12 maths students attended the annual “Maths in Action” lecture trip at Warwick University. The students were a credit to the school, as always.

Bea in Year 11 had the following thoughts on the day…

“The Maths in Action event at Warwick University was an action-packed day enjoyed by all. I particularly enjoyed the lecture by Matthew Scroggs in which he talked about over-analysing video games.  It was fascinating to learn about the different dimensional shapes that video game characters live on and how the well-loved games, like Asteroids, would change if mapped onto 4D shapes, one of which being the Klein bottle. From using maths to predict the future, to fighting antibiotic resistance, there was something for everyone and I would like to thank the maths department for such a thoroughly enjoyable experience.” 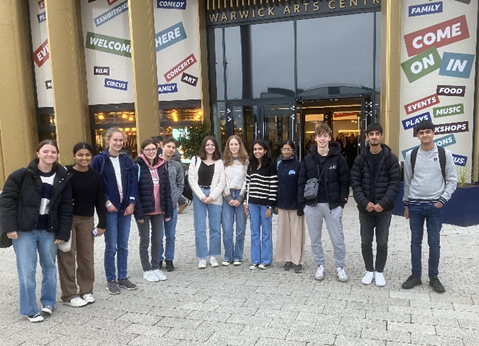 As part of the Maths Week England events, we welcomed over 40 students in two sessions across all Key Stages to a mass maths Kahoot, with questions on all things mathematical, along with a few "curved balls" too! Play was enthusiastic and vocal, and the students really enjoyed something a bit different. Our winners were Miles for Key Stage 3, Zainab for Key Stage 4 and Oliver for Key Stage 5. Here's to an even bigger Kahoot next year... 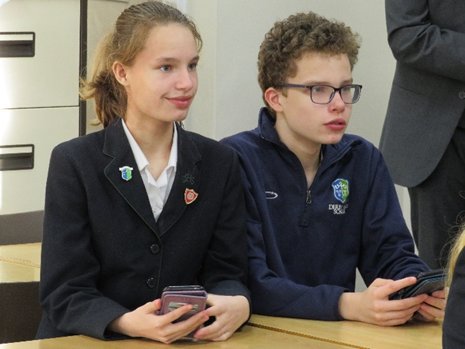 U13 Netball vs QEGS

On Wednesday 23rd November, our U13 A and B netball teams travelled to Queen Elizabeth’s Grammar School in Ashbourne for a friendly fixture. The B team played first, and worked hard against a speedy QEGS team. For the majority of the first half, it was very close, with play mainly around the centre court until QEGS managed to sneak some goals past the defenders. As the game continued, the team continued to work hard at getting free and making sure their passes were powerful and accurate. They gave it their all, but the game finished with a win to QEGS. Well done to Alex who was nominated as the player of the match.

The A team were up next, and the game was very end to end initially. QEGS continued to battle and passed the ball around at pace, providing them with a number of goal scoring opportunities. Moving into the second half, the team knew they were to work on getting in front of their defenders to offer passes, and to think about increasing the height and power of their passes against some speedy defenders. They worked well and made progress with this, with a couple of lovely goals being scored. Well done to Layla for being nominated as the DHS player of the match. 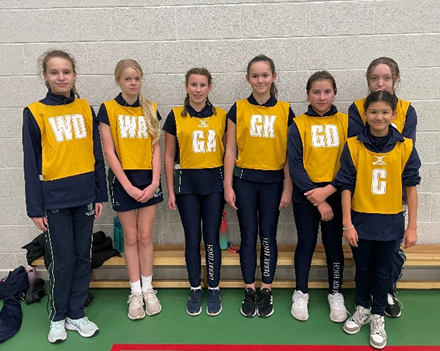 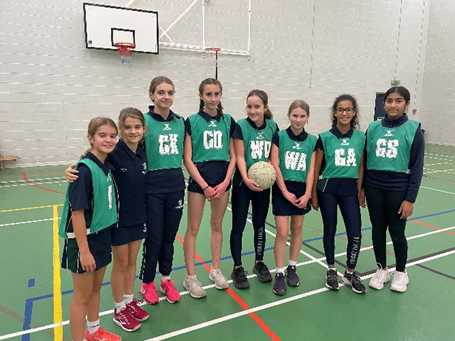 Last Thursday our Year 7 A and B netball teams played against Littleover Community School. Some great games, teamwork, goal scoring and lots of good passing. The B team had a fantastic game, which concluded with a 6-4 win. The A team had a very competitive match, with the team fighting hard to turn the result around but eventually, after lots of persistence they lost their game but worked extremely well as a team. 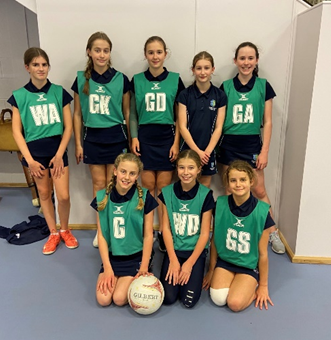 The U12 team played in their first City Schools Basketball Tournament this week. The team have been working hard at lunchtime practice and during their PE lessons. We were all very excited at having an opportunity to play against various other schools.

After a nervous start, we managed to beat Landau by a single point.  As the tournament progressed, we began to win more rebounds and create more space inside the 'key' with several baskets in quick succession to claim victory in our next two games against Noel Baker and Alvaston Moor.  It was a real team effort, where lots of the team managed to score at least one basket. In the end, we remained undefeated. It was a brilliant experience for the team and we will continue to practice in preparation for our game next week. Well done to everyone who took part on the day. 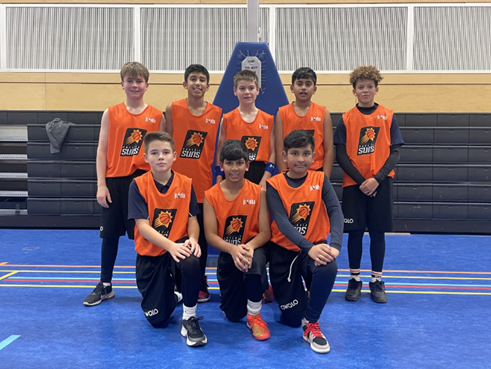 Pippy qualified for the National Trampoline League Finals held at Lee Valley VeloPark in London last Saturday. She completed two clean routines on the trampoline and finished in 22nd place nationally. Pippy also competed on the Double Mini Trampoline finishing in 8th place nationally. This was a fantastic opportunity to experience her first national trampoline competition and visit the Olympic Park in London.  There is a rumour that League Finals may be held at Derby Velodrome next year, which is exciting news for Pippy! It is fantastic to see Pippy placing so high at National Competitions and from the conversations with Miss Stirland, it is clear Pippy is determined to place even higher next time. Well done Pippy! 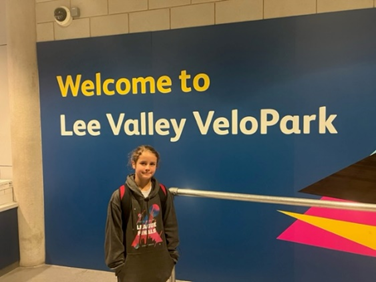 Thank you to everyone for their kind donations for our Christmas charity collection. As a school we will once again be supporting Christmas Connections, which last year provided presents to around 850 children in Derby. The project is run by Derby City Mission in partnership with Derby Food4Thought. Chaplain Jo delivered the wonderful collection of gifts this week and they were delighted to receive so many donations.

With the Christmas festivities just around the corner, children are looking forward to receiving gifts. For many, this may be devices that allow you to go online.

We have come to the end of a very busy week, welcoming a team of five inspectors from a range of prestigious independent schools. I go around the school regularly, popping in to classrooms and activities, and I have been delighted that this week we had the opportunity to host a group of fellow professionals seeing what I see on an everyday basis. I am incredibly proud of everything our pupils and staff achieve in all areas of school life. I have worked in four high achieving schools before coming to Derby High, but here we have created something truly special - a very supportive and yet challenging culture which ensures each and every one of our students achieves success.

We have come to the end of a very busy week, welcoming a team of five inspectors from a range of prestigious independent schools. I go around the school regularly, popping in to classrooms and activities, and I have been delighted that this week we had the opportunity to host a group of fellow professionals seeing what I see on an everyday basis. I am incredibly proud of everything our pupils and staff achieve in all areas of school life. I have worked in four high achieving schools before coming to Derby High, but here we have created something truly special - a very supportive and yet challenging culture which ensures each and every one of our students achieves success.

This morning in my senior assembly I talked about some of my fears. I am particularly afraid of heights, deep water and sharks. As the years have gone on, I am definitely more fearful of things. I must admit that I do let these irrational fears rule what I do. It is very easy to let unfounded concerns stop you from trying new things. The easy option is not to put yourself out there and not try anything new. That would be a mistake.

Yesterday in my Primary assembly I talked about some of my fears. I am particularly afraid of heights, deep water and sharks. As the years have gone on, I am definitely more fearful of things. I must admit that I do let these irrational fears rule what I do. It is very easy to let unfounded concerns stop you from trying new things.

Monday was an exciting day in history for UK space exploration, with the first ever rocket launch from UK soil. Like many I stayed up past my bedtime to watch Virgin Orbit’s modified plane, dubbed Cosmic Girl, take off from Newquay, before releasing the rocket with satellites on board. The rocket then ignited and accelerated to 22 times the speed of sound, soaring past the coasts of Spain and Portugal before leaving the Earth's atmosphere at 17,200mph.