I would like to remind you that next week is a full week of lessons as normal. Following parental feedback, we made the decision to move the inset day to the start of the summer term, and therefore no longer have this long weekend, which can be difficult for parents to manage childcare. It is also so important, at this time of year with the many performances and activities leading up to Christmas, that we have full weeks with the children.

I value your views on ways to improve our educational provision at Derby High - my door is always open and I appreciate your feedback.

Last night our Senior Hall was transformed into Me Hearty High School, the most distinguished pirate school on the seven seas! Our Years 3 and 4 dazzled their audience as the children enthusiastically performed Pirates vs Mermaids, a musical by Gaynor Boddy and Rebecca Kincaid.

It was a fantastic musical journey for everyone to enjoy - Captain Scarypants thought he would fail his ‘Arrr’ levels because he could not swim! The jokes had everyone laughing and the cast sang with so much energy and flare.

Well done to all our wonderful performers for an excellent, swashbuckling show!

To see more photos please visit our Primary Gallery by clicking here. A link for the recording will be sent to Primary parents next week. 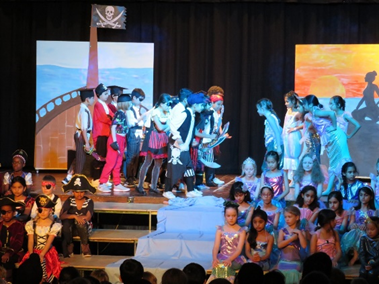 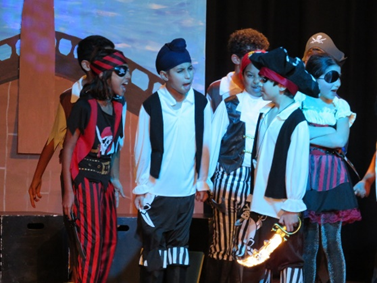 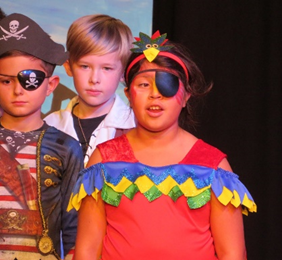 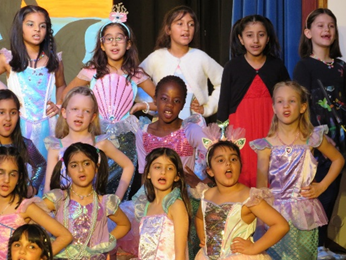 Thank you to all the pupils and staff who have already brought in donations for our Christmas charity collection. As a school we will once again be supporting Christmas Connection, which last year provided present parcels to around 850 children in Derby. The project is run by Derby City Mission in partnership with Derby Food4Thought. This year, the charity are particularly welcoming gifts relating to sports, imaginative play, Lego/meccano, arts and crafts. They would also welcome gifts of brand new toys, teddies, books, toiletry gifts, chocolate selection boxes and sweets.  These need to be brought into school by next Wednesday (23rd November) so that we can pass them on to the charity in good time. 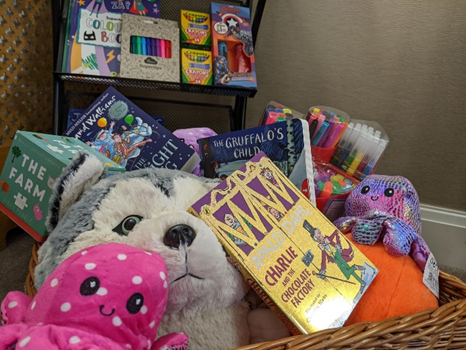 It was our annual Derby High School fancy dress day on Monday. Thank you to everyone who contributed to our fundraising for BBC Children in Need.

Our Primary school pupils followed the theme “Together we can”. The children looked wonderful and were inspired to think about what they could be when they grow up. It was exciting to see the different professions the children could see themselves working in. Thank you to all the parents for helping and supporting their child with their fancy dress. 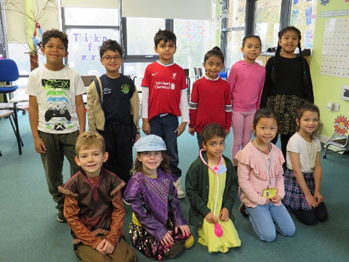 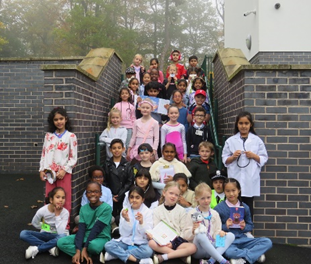 An U9 girls’ hockey team played a six a side match against Denstone on Tuesday morning. The weather was far from desirable, but the team remained focused and tried their best throughout. They played 2 x 15 minute halves of hockey, and just got better and better as the game went on - with their understanding of the rules, and their overall stick control. Denstone were a strong team and had a number of scoring opportunities and goals, but the Derby High team listened to the advice given to them and tried to put as much into practice as possible. There were a few goal-scoring opportunities, but sadly, the ball skimmed past the post.

A great effort and we are confident the students will continue to work hard on further developing their skills. 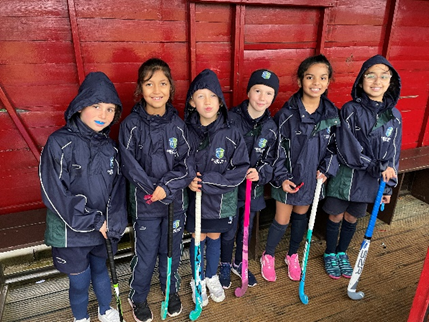 This week we travelled to Denstone School to play in a tag rugby fixture. We played 4 quarter and 8-a-side games. The weather was against us and it was both wet and windy, but this did not stop our team working hard to score and defend their try line. It was a close game, Derby High scored the first try but this was soon followed by 2 from Denstone. At half time the score was 6-5 to Denstone. We knew we needed to work hard to gain those extra points and prevent them from scoring again. In the end, we went away with a win of 9-7! Well done to all of our players! 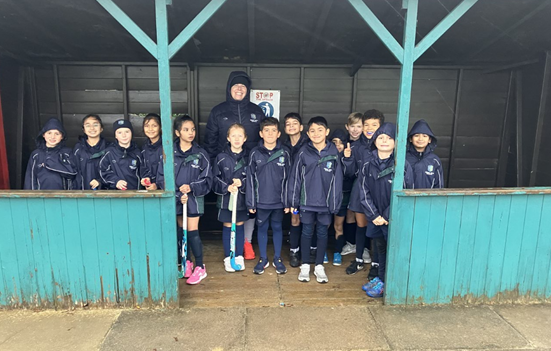 On Tuesday afternoon, our Year 5 and 6 hockey teams travelled to Belper Hockey Club to play a variety of mixed matches against Mugginton and also Meadows Primary Schools. This was a mixed mini tournament; all schools mixed to form four teams and played three rounds of matches. The players had lots of fun and scored goals. It was a fantastic opportunity for the players to develop their skills and a great experience to play together. 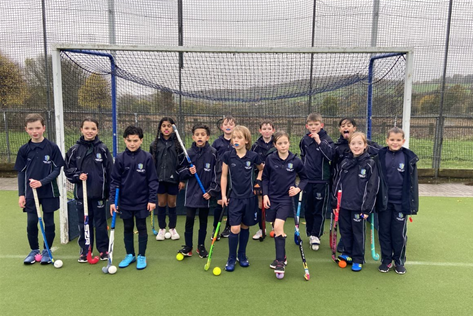 Derby High’s opening game against Bemrose School was a 0-0 draw. We enjoyed periods of possession with nice drag back turns and close passing from the Bella and Maisie but the Bemrose defence held firm. Similarly Maya and Lily were strong in defence and cleared any through balls.

In the second game we faced who would be the strongest team in our group - Griffe Field. This again was a close affair and we had to defend in numbers to hold them out. Damla made saves in goal and only from one long ball, when the Griffe Field striker was one-on-one, did we concede a goal. Bella made an amazing clearance off the line later on to prevent a further score, with Imogen, Connie and Parizay trying to set Maisie free up front, but to no avail.

After a short break, a snack and some hydration, Derby High set a game plan to gain territory, by attacking more, and trying to get shots on target. The girls executed the plan brilliantly in the third match against Walter Evans. We dominated possession and made good through balls to set the attacking midfielders and strikers free. Maisie scored the first goal with a swift strike in the box which was quickly followed up by Parizay who showed determination, to follow up an attack, and bravery to sneak it past the goalie from close quarters. Imogen then went close with a shot which flashed just wide, before Bella decided she wanted a goal. After some amazing skills to find space, Bella powered a shot into the far corner of the net. Special mentions for Connie, who worked tirelessly to chase down the opponents and make runs into space before connecting the play, and Maya, Lily and Damla, who set a strong defensive platform to ensure a clean sheet with no goals conceded.

Game four followed quickly with the winners destined to finish second in the group and qualify for the semi-finals. The girls played with true grit and determination. Damla made a great save before Parizay cleared the ball off the line. The match looked likely to end in a draw before a series of accurate passes in midfield found Imogen in space, who made sure she hit the target to score the only goal of the game and secure a 1-0 lead. Excellent closing down and pressing the opposition stopped them creating further chances and Derby High qualified for the semi-finals.

The semi-final was always going to be a difficult match against group 2 winners and unbeaten Oakwood Juniors. Derby High worked very hard and showed persistence and determination against a physical opposition who ran out eventual winners 0-2.

The girls played very well and grew in both experience and confidence as the tournament went on. They were thrilled to qualify for the semi-finals despite some trepidation about playing against a very accomplished Oakwood team who became the eventual winners in the final.

Well done to everyone who took part, you truly did the school proud: 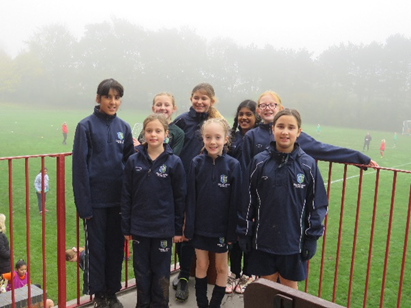 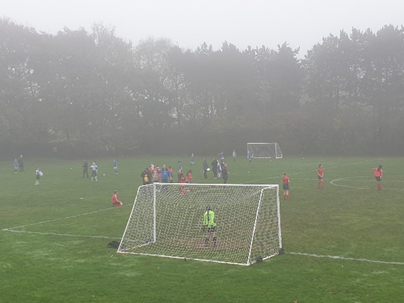 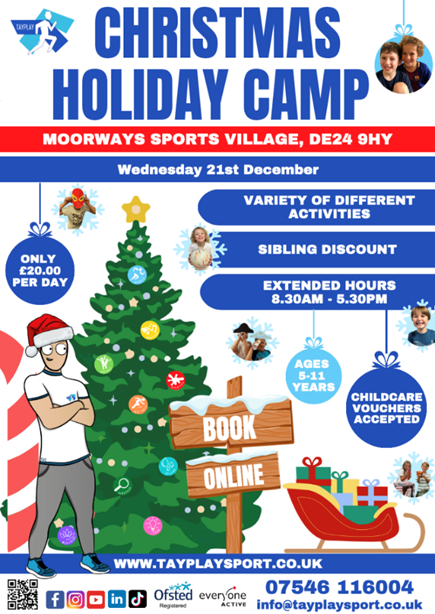 Next week is Anti Bullying Week and Internet Matters have created a useful, age specific conversation guide to provide advice for parents. It is important to help your child feel they can come to you if they have any experiences with online bullying. Click here to access the guide: Cyberbullying conversation starter guide - Internet Matters

In Derby High Primary we use the word “STOP” to identify bullying.

A bully is someone who hurts another person more than once, by using behaviour, which is meant to scare, hurt or upset that person.

It is important to remember that single problems and falling out with friends are not bullying.

Bullying is behaviour, which is repeated on purpose and is meant to upset someone.