It is always wonderful to hear how well Derby High alumni are doing in their careers. This week I was at Derby Royal with my daughter for a minor hand operation. Arriving in the anaesthetic room, we were greeted by the anaesthetist who told us she went to Derby High, completing her A levels some 12 years ago. She spoke fondly of her time at the school, and it was clear she is very much enjoying her work. Also this week we received some lovely news about two of our more recent alumni, Louise and Hannah, who completed their A levels in 2018. They were successful in gaining places on the very first JCB Degree Apprenticeship course in Business and Management. We were delighted to hear that they have both graduated with 1st class Honours degrees from Sheffield Hallam as part of their apprenticeships.

These are just two examples of fantastic successes for our alumni. We are very proud of their achievements and love hearing from our past Derby High students.

Reception have been learning about why we wear red poppies as a symbol of remembrance and hope for a peaceful future. The children have enjoyed being creative and making their own sun catcher poppies. We have displayed them on the window of our classrooms so the children can enjoy seeing the sunlight shine through their beautiful creations. 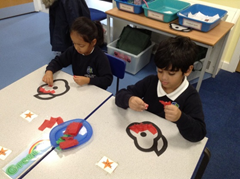 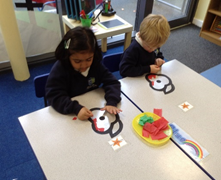 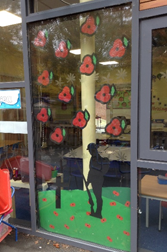 As part of their topic work this term on Anglo Saxons and Vikings, Year 5 Calke produced a fantastic Class Assembly to highlight some of their learning. They used drama to retell the story of the arrival of the Anglo Saxons to Britain from around 400AD and what life was like for these Anglo Saxons once the Vikings begun to arrive in around the 800s. They also highlighted the importance of King Alfred the Great during this period and his struggles to keep Britain reasonably peaceful under threat from the Vikings, as well as how his actions shaped the Britain we see today.

The children performed their assembly with great enthusiasm and energy, especially when it came to their singing! We hope that parents and children who watched the recording of the assembly enjoyed it as much as the children of Calke did performing it! 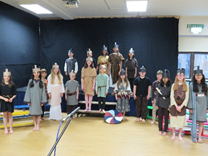 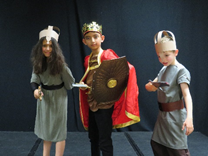 To mark the end of the study of the book 'Alex Rider, Stormbreaker' by Anthony Horowitz, Year 6 are having a 'Spy Day.' Dressed as spies and secret agents the children are experiencing lots of different activities including breaking codes, tackling physical obstacles and working through tasks to pass their training mission! With an afternoon of collaborative activities in the sports hall and outside on the trim trial, the year group have enjoyed concluding their book study by bringing the story to life! 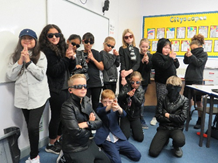 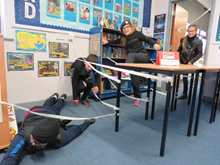 On Tuesday, 12 Year 3 and Year 4 footballers went and took part in a football festival held by Old Vicarage School at Derby Rugby Club. For some children, this was their very first experience of a competitive sports fixture representing Derby High and so the excitement levels were very high. The children were split into two teams to compete in their respective groups. Mr Harper’s team gave a huge amount of effort in all of their games and were really improving by the time they completed their final game, finishing 6th overall. Mr Horne’s team were very energetic and used that to help them win their first game 2-1 against Salterford House. They lost their next match but a competitive final game against Old Vicarage ended 0-0 and an exciting penalty shootout was used to find out who would finish 3rd or 4th. Unfortunately we couldn’t quite get over the line and a 4th place finish was confirmed.

Everyone had a great time, with a special mention to Racil and Felix for picking up their excellent play awards at the end. 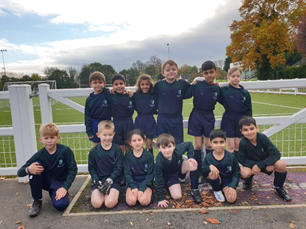 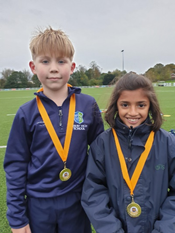 Year 5 footballers travelled to Repton Prep on Wednesday to compete in two friendly matches. Some of the footballers were playing in their first matches and were really excited to be wearing the Derby High football shirts. The players were split into two teams, the ‘blues’ and the ‘greens’. The ‘greens’ started on the first pitch and worked very hard after finding themselves a few goals down early on. But with persistence paying off, Jack managed to score a goal and spark celebrations all around from the travelling parents! Although they didn’t quite manage to win, they were all really enthused and happy with their performance.

The ‘blues’ headed over to the larger pitch and also found themselves a few goals down early on. However, this invigorated the players who responded with 2 quick goals. A goal for Repton just before the end of the ‘third’ meant they led 4-2 at the first break. Buoyed by the team talk, the team scored again and some really determined play saw the second ‘third’ finish 2-2 (6-4 overall). Some real positive play in the final ‘third’ of the match saw the game finely poised at 6-5 with Derby High pressing for a late equaliser. Unfortunately this meant space at the back and Repton ended the game with a final goal, meaning the last ‘third’ ended 1-1 and 7-5 to Repton overall, with a hat-trick for Noah and two goals for Arjun. A really competitive match and two great games were played in excellent sportsmanship; Well done, everyone!! 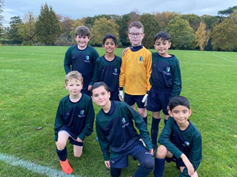 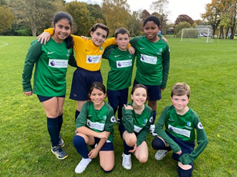 Silver for George in the Derbyshire Junior Grand Prix. 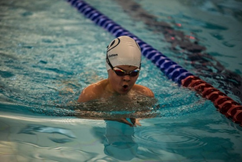 All sport fixtures are now in our calendar in the Derby High Parent Portal. Please do log into the Parent Portal to view all the calendar events for this half term. To log in please click here.

If you experience any problems logging into the portal please email networkadmins@derbyhigh.derby.sch.uk, thank you.

Friday 19th November – Children in Need Day. No uniform day so wear Pudsey Ears, PJ’s or fancy dress and bring a pound for Children In Need.

Perfection is overrated! In so many areas of life we are encouraged to strive for perfection. Now that’s not a bad thing, however it can result in us missing out on the beauty of the world around us. Make no mistake, I am all for being the best you can be and having high standards, but not at the expense of enjoying life. You see, if you become obsessed with perfection, living in an imperfect world can become quite taxing and you risk losing sight of the importance of the process. In my Primary assembly yesterday, I illustrated this with the wonderful story A Squash and a Squeeze.

Perfection is overrated! In so many areas of life we are encouraged to strive for perfection. Now that’s not a bad thing, however it can result in us missing out on the beauty of the world around us. Make no mistake, I am all for being the best you can be and having high standards, but not at the expense of enjoying life. You see, if you become obsessed with perfection, living in an imperfect world can become quite taxing and you risk losing sight of the importance of the process. In my assembly this morning, I shared the tale of a squash and a squeeze.

Another busy week at Derby High has concluded with the much anticipated return of House Drama. Following a year’s break due to covid, it has been brilliant to be able to bring back this wonderful DHS tradition. House competitions, whether they be sport, debating, drama or music, always stir up great passion, camaraderie and excitement. In line with our covid safe measures, performances were live-streamed into form rooms this afternoon for all students to watch together - and I have been fortunate to be able to see it at home, whilst I am isolating with Covid. It has been a fabulous afternoon, with great performances and teamwork both on and off stage.

It may have only been a three day week, but this week has been full to the brim. Year 5 enjoyed National Space Day yesterday and on Monday we welcomed nine visiting schools for an Upper Juniors’ netball festival. It is fantastic to see our outdoor Christmas tree return to the Head’s Lawn. Christmas preparations are in full swing with lots of rehearsals and recordings for our Christingle, Christmas productions and Carol Service. We look forward to sharing these performances with you in the coming weeks. I wish you a restful, extended weekend. The exeat gives everyone the opportunity to recharge batteries ready for the final weeks of the term.

This week has been Anti-Bullying week, with the theme “One Kind Word”. It was wonderful to see the array of odd socks pupils were wearing on Monday, starting off the week so positively. On Thursday, assembly was taken by a group of Year 9 students who performed some lovely sketches and discussed how important it is to stamp out bullying. We finished the week with all the children dressing up in support of Children in Need. So many wonderful outfits, this is always a lovely day each year.