This half term has been incredibly busy with pupils and staff taking part in the full range of school activities, with weeks packed with sports fixtures, trips and a range of clubs and activities, along with making good progress across the full range of academic subjects. I would like to take this opportunity to thank every member of our school community for the positive and understanding way that each and every one of you has contributed to ensure we all keep safe.

This morning we were delighted to share with you, our Harvest Festival Service. The children enjoyed recording this years’ service, taking time to reflect and think about all the things we are thankful for. 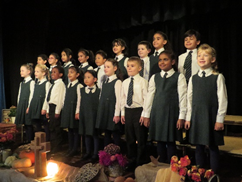 Thank you to our school community for all the generous donations we have received for our Harvest collection. The collection has been donated to the Padley Centre and Derby City Mission, who were overwhelmed with the amount of produce given and wished to also pass on their thanks.

I wish everyone a good two week break. I hope you and your family stay well and have a chance to spend quality time together.

The Hour of Code

The Year 2 to Year 6 children have been taking part in The Hour of Code this week.

The Hour of Code started as a one-hour introduction to computer science, designed to demystify "code", to show that anybody can learn the basics, and to broaden participation in the field of computer science. It has since become a worldwide effort to celebrate computer science, starting with 1-hour coding activities, but expanding to all sorts of community efforts.

More information can be found by clicking here. 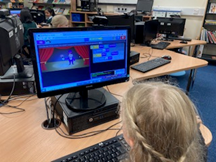 Today in Reception we have been learning about 2D shapes. The children have loved making pictures with the 2D shapes and naming them. 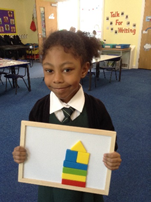 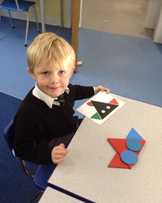 This week in Reception we have been talking about staying healthy and looking after our bodies. As part of this, we have practised cleaning our teeth and have drawn pictures of healthy meals. 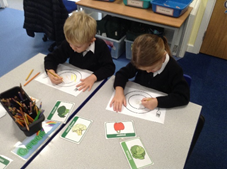 Yesterday Year One had a wonderful day celebrating all things Harvest and Autumn. The children enjoyed being poets, bakers, dancers and chief apple crumble tasters!

On Wednesday the U10 girls’ hockey team played in The Elms hockey tournament. They played 5 games against different prep schools in a 7 a side format. There were lots of good hockey skills on show, the players showed determination and resilience and had lots of fun! 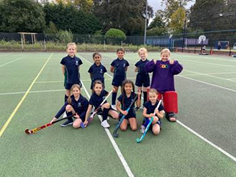 On Wednesday, the U11 girls hockey team travelled to Rugby School to play in the IAPS Hockey Regional Qualifier. This was a 7 a side tournament, where the girls played in 6 matches in a round robin format before lunchtime, with the hope of progressing to the cup or plate competitions in the afternoon.

We started the first game excellently; pressuring high and having shots on goal within the first few minutes. A great start, and a well-deserved 0-0 draw with Ashfold. The girls then had a game off to chat through some positions, coaching points and tactics ahead of their final five games which were all back to back, and were determined to put their learning into practice.

The next game against Winchester House showed some good promise from all of the players, but a well-executed lifted slap by their centre forward sadly went into the goal; the game finished a 1-0 loss. Bedford Modern Junior were our next opponents, and the girls put on plenty of pressure with a number of shots on target. Sadly, they were able to score a couple of goals from open play and well-rehearsed penalty corners; the game finished 2-0. Our next game was against Warwick Prep who applied a great deal of pressure to players on the ball. Our passing and dribbling was well-executed, but sadly when we got dispossessed, we struggled to win the ball back due to their pace on the ball. However, some very impressive saves on the line by defenders, and by Matti in goal, were noted by the opposition's teachers!

Our final two games were against two of the strongest teams in the pool, The Croft and Milton Keynes Prep who were able to dominate their games against us, with particularly strong finishes. The girls did not give up and fought to the final whistle with their tackling and perseverance to move the ball up the pitch, and really demonstrated true grit and determination.

The U11 team enjoyed all of their games, learnt a lot and made progress with their understanding and performances in competitive hockey. Unfortunately, they did not progress to the afternoon games, but were a credit to Derby High School. A massive shout out must go to Matti who volunteered to be the goalkeeper for the tournament and did a fantastic job with a number of impressive saves throughout all of the games. Well done to all involved! 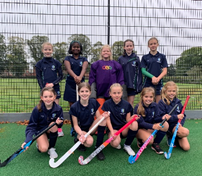 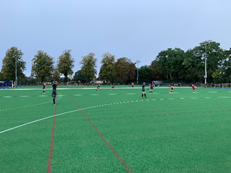 Monday afterschool saw our U11 footballers continue their fixture programme with two matches against Dale Primary. Although coming off the back of some recent defeats, the team were taking a positive attitude into the game and were given instructions to attack and defend as a team, with no specific ‘positions’ given to let the team enjoy the game and express themselves against their opposition.

The first game was very competitive, with both sides showing good defending and tackling to win possession of the ball for their team. With the positivity running through the team after some heavy spells of possession, we made the break through with a goal from Noah. This then led to further goals from AJ, Ruby and another for Noah to give the team a 4-0 win!

After another positive team talk and a change around in substitutes, the team continued to press and attack and win the ball high up the field. With some great tracking back to defend on his debut by Joel, it was Jakey who made the break through, scoring on his debut for the football team this season. Another round of substitutions brought on AJ who immediately scored after coming on. With continued pressure mounting in the opposition half, the ball broke out wide and was put into the net by Khyan to make it 3-0 and a second win of the evening for the team.

A mention to Rory who captained the team well in the centre of the pitch, Hamdan for his continued efforts down the wings, Arjun for his composure in winning the ball back for the team and George in goal, who completed his goalkeeping duties with confidence. Well done to all those who participated, including Dale Primary who gave 100% across both matches, as well as Lia and Priya in Year 10 who gave up their time to come and help organise the games. 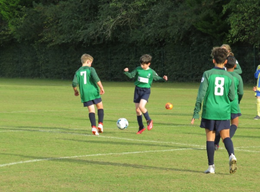 Please be reminded that all children should return after the half term in their winter uniform. Thank you.

I'm sure that you are, by now, familiar with the phenomenon, Squid Game, on Netflix. This programme portrays a dystopian world, a little like Hunger Games, and while it is rated 15, is being watched by those a lot younger, including primary students. This could be happening direct, or via video clips on platforms such as TikTok.

These young people are beginning to not only play these games in the playground but also to set online challenges linked to the tv show. There is also a linked game of the same name on Roblox, which we know a lot of our students in primary and early seniors play.

It is important that we don't raise this with the young people directly as we don't want to alert them to something they haven't yet come across, but if you hear them talking about this, do engage them and discuss the dangers of such things.

Here are a couple of useful links:

Perfection is overrated! In so many areas of life we are encouraged to strive for perfection. Now that’s not a bad thing, however it can result in us missing out on the beauty of the world around us. Make no mistake, I am all for being the best you can be and having high standards, but not at the expense of enjoying life. You see, if you become obsessed with perfection, living in an imperfect world can become quite taxing and you risk losing sight of the importance of the process. In my Primary assembly yesterday, I illustrated this with the wonderful story A Squash and a Squeeze.

Perfection is overrated! In so many areas of life we are encouraged to strive for perfection. Now that’s not a bad thing, however it can result in us missing out on the beauty of the world around us. Make no mistake, I am all for being the best you can be and having high standards, but not at the expense of enjoying life. You see, if you become obsessed with perfection, living in an imperfect world can become quite taxing and you risk losing sight of the importance of the process. In my assembly this morning, I shared the tale of a squash and a squeeze.

Another busy week at Derby High has concluded with the much anticipated return of House Drama. Following a year’s break due to covid, it has been brilliant to be able to bring back this wonderful DHS tradition. House competitions, whether they be sport, debating, drama or music, always stir up great passion, camaraderie and excitement. In line with our covid safe measures, performances were live-streamed into form rooms this afternoon for all students to watch together - and I have been fortunate to be able to see it at home, whilst I am isolating with Covid. It has been a fabulous afternoon, with great performances and teamwork both on and off stage.

It may have only been a three day week, but this week has been full to the brim. Year 5 enjoyed National Space Day yesterday and on Monday we welcomed nine visiting schools for an Upper Juniors’ netball festival. It is fantastic to see our outdoor Christmas tree return to the Head’s Lawn. Christmas preparations are in full swing with lots of rehearsals and recordings for our Christingle, Christmas productions and Carol Service. We look forward to sharing these performances with you in the coming weeks. I wish you a restful, extended weekend. The exeat gives everyone the opportunity to recharge batteries ready for the final weeks of the term.

This week has been Anti-Bullying week, with the theme “One Kind Word”. It was wonderful to see the array of odd socks pupils were wearing on Monday, starting off the week so positively. On Thursday, assembly was taken by a group of Year 9 students who performed some lovely sketches and discussed how important it is to stamp out bullying. We finished the week with all the children dressing up in support of Children in Need. So many wonderful outfits, this is always a lovely day each year.